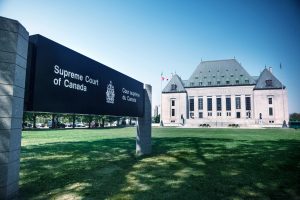 In Chagnon v Syndicat de la function publique et parapublique du Quebec, 2018 SCC 39 [Chagnon] the Supreme Court of Canada (“SCC”) analyzed the scope of parliamentary privilege. Parliamentary privilege is grounded in the preamble of the Constitution Act, 1867, which provides Canada with “a Constitution similar in Principle to that of the United Kingdom.” Essentially, privilege protects legislative activity from judicial scrutiny. The general rule for analyzing parliamentary privilege was set as precedent in New Brunswick Broadcasting Co v Nova Scotia (Speaker of the House of Assembly), [1993] 1 SCR 319 [New Brunswick Broadcasting]: Canadian courts can inquire into the existence and scope of parliamentary privilege, but not its exercise. In Chagnon, the SCC had to decide whether the President of Quebec’s legislature could rely on two privileges – the privilege over the management of employees and the privilege to exclude strangers – to shield his decisions from judicial review. The SCC interpreted these privileges according to their contribution to fulfill the constitutional role of the legislature, and concluded that the privileges failed to meet the threshold of the necessity test. On October 5, 2018, the SCC released itsdecision that parliamentary privilege does not permit the termination of employees without review.

The National Assembly Asserts its Privilege

Three security guards employed at the National Assembly of Quebec (“Assembly”) were dismissed by the President because they used their workplace’s surveillance cameras to surreptitiously look inside rooms of an adjacent hotel. The guards’ union contested their dismissal by way of a grievance before a labour arbitrator – a normal procedure for civil servants who feel they have been wrongly fired by their employer. The President objected to the labour arbitrator’s jurisdiction, arguing that his decision to dismiss the guards was immune from review because it fell within the scope of his parliamentary privilege to manage employees and exclude strangers from the Assembly for security purposes. The guards argued that their right to meaningfully associate in the pursuit of collective workplace goals was constitutionally guaranteed under s. 2(d) of the Canadian Charter of Rights and Freedoms [Charter] and could not be limited by parliamentary privilege due to the application of the Act Respecting the National Assembly, CQLR c A-23.1 [ARNA].

The Majority Reasons: Giving With One Hand and Taking With the Other [1]

Justice Karakatsanis, writing for the majority of the SCC acknowledged that decisions falling within the scope of parliamentary privilege cannot be reviewed by an external body, including a labour arbitrator and the SCC itself. New Brunswick Broadcasting suggests that a statute must be interpreted in such a way so that it does not implicitly invalidate parliamentary privilege, however; the majority abrogates privilege while interpreting the ARNA. Section 120 of the ARNA establishes that all employees of the Assembly are members of the civil service and are generally subject to a labour relations regime. Justice Karakatsanis finds that due to the ARNA, the Assembly does not have exclusive control over the management of its employees. By interpreting the ARNA in such a way, the majority believes that the dismissal of the guards is not protected by parliamentary privilege, and therefore, is not immune from external review. The majority holds that the grievance should go back to the labour arbitrator to be decided on its merits.

Narrowing the Scope of Parliamentary Privilege

Courts cannot review activities protected by parliamentary privilege, even on Charter grounds, but they can ensure that the scope of privilege is limited to only those matters necessary for legislatures to fulfill their constitutional role. In Chagnon, the majority held that excluding strangers from the Assembly was protected by privilege, but the scope of this privilege did not extend to dismissing particular security guards. This is because the President could not demonstrate that the dismissal of security guards was sufficiently connected with the core operation of the Assembly, thus failing the necessity test. In other words, the core legislative function of maintaining security and excluding strangers in the Assembly could still be achieved while security guards submitted their grievance for dismissal. Even though the President has the authority to dismiss the guards, such decisions remain subject to the usual grievance procedure. By narrowly interpreting parliamentary privilege in this way, privilege may be reconciled with the section 2(d) Charter right to meaningfully associate in the pursuit of collective workplace goals.

Per the majority, the President has a high burden to establish that his decision to fire the guards is captured by parliamentary privilege and is thus excepted from the general statutory scheme of ARNA and further judicial scrutiny. However, Justices Côté and Brown opine in dissent that the security and management privilege involved in the dismissal of the guards is outside the labour arbitrator’s jurisdiction. Accordingly, they conclude that the President’s decision to dismiss is within the scope of security and management privilege.

One of the privileges the President grounded his action on was the privilege over the security of the Assembly. The dissent notes that in order for the Assembly to function with efficiency, autonomy, and dignity, it is essential that it operate in a secure environment. Therefore, security is a sphere of activity protected by “absolute parliamentary privileges” (Chagnon, para 78). If the need arises, security privilege licences the exclusion of individuals from the Assembly. The President delegated certain security tasks, including the exclusion of strangers, to the guards. Consequently, the guards acted within the scope of parliamentary privilege and outside the scope of judicial review. Justices Côté and Brown note that the President’s decision relating to security cannot be challenged in or reviewed by a court or tribunal. Giving the labour arbitrator the power to review the President’s decision would take away from the Assembly’s control over part of its security.

Three points within the reasons for judgement require further analysis. First, Justice Karakatsanis interprets parliamentary privilege narrowly so that it does not immunize the President’s decision to dismiss employees from judicial review.The scope of parliamentary privilege is so narrow that the President would be subject to judicial review for all employment conditions, from salary to seniority. Whether this consequence is preferable is a policy question that requires further consideration. Second, it’s troubling that Justice Karakatsanis distinguishes between promoting security and exercising a Parliamentary function whereas the dissent captures this nuance in a more compelling way. Justices Côté and Brown explain that “a security guard does far more than simply promote the Assembly’s ability to discharge its functions; it exercises, on the President’s behalf, a privilege that is essential to the Assembly’s sovereignty” (Chagnon, para 137). Third, Justice Karakatsanis argues that it is immaterial whether the employees exercise a delegated privilege in the performance of their duties, since the issue is whether the dismissals of employees who implemented this privilege on the President’s behalf must be immune from external review. However, as the dissent points out, this position disregards the jurisdictional aspect of the issue and distorts the necessity test laid out in Vaid, because the dismissal of the employee to whom a privilege has been delegated is the ultimate exercise of the management privilege. Otherwise, “the delegation of a privilege would automatically mean its extinction” (Chagnon, para 140).

[1]A term invoked by Justices Côté and Brown in Chagnon, para 159.

Vivian Grinfeld is a third-year JD student at Osgoode Hall Law School. She holds a BA (Hons) in Public Affairs and Policy Management from Carleton University. Vivian has honed in her interests to taxation law, with special interests in charity law (Co-Founder of the Osgoode Charity Law Association) and international trade law (Intern at the Canadian Embassy in Washington, DC). Upon graduation, Vivian will be clerking at the Tax Court of Canada.