Morasse v Nadeau-Dubois : Powers of Contempt and Freedom of Expression 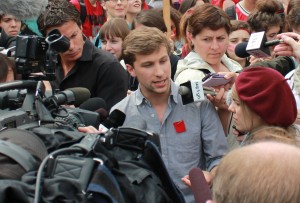 Gabriel Nadeau-Dubois talking to the media.

In the spring of 2012, thousands of students in Quebec took to the streets to protest proposed increases in university tuition fees. Student organizations held votes opposing the increases and declared that students were “on strike.” Students formed picket lines at many institutions that prevented other students and professors from accessing buildings. Some individuals turned to the courts to obtain injunctions for access to classes. Jean-Francois Morasse was one such student. On April 12, 2012 Morasse’s request for an injunction was granted and later renewed by Emond J on May 2, 2012.

At the time of the protests, the respondent Gabriel Nadeau-Dubois was spokesperson for a student organization responsible for organizing protests and picket lines. Nadeau-Dubois appeared on RDI news network on May 13, 2012 for an interview following a court order resuming classes at a CEGEP. Nadeau-Dubois was asked to comment on whether his organization would continue to encourage picketing, to which his response included the statement:

It’s quite unfortunate that there’s really a minority of students who’re using the courts to circumvent the collective decision that was made. So we find it perfectly legitimate for people to do what they have to do to enforce the strike vote, and if that takes picket lines, we think it’s a perfectly legitimate way to do it. (see para 8, SCC)

Following the interview, Morasse brought a motion for contempt against Nadeau-Dubois for violating Emond J’s order.

Jacques J of the Quebec Superior Court found Nadeau-Dubois guilty of contempt under art 50 para 1 (since replaced by art 58) of the Quebec Code of Civil Procedure, CQLR, c C‑25 (2012 QCCS 5438). Jacques J held that Nadeau-Dubois’ knowledge of the May 2nd injunction could be inferred from his position as spokesperson and his knowledge of other injunctions that had been issued by courts in relation to the protests. The trial judge found that through his comments, Nadeau-Dubois encouraged students to violate injunctions generally, and thus had the effect of also encouraging violations of the specific injunction in question. The trial judge also held that Nadeau-Dubois had an intention “to obstruct justice or undermine judicial authority” (SCC, para 14).

A unanimous bench of the Quebec Court of Appeal, 2015 QCCA 78 overturned the conviction, finding that there was insufficient proof Nadeau-Dubois knew of “the existence and content” of the specific order. Absent knowledge of the May 2nd injunction, the QCCA held that the mens rea of the contempt charge could not be established beyond a reasonable doubt. The court also found that the ambiguity of Nadeau-Dubois’ statements were fatal to a finding of actus reus beyond a reasonable doubt.

A five-judge majority (out of the full panel) at the Supreme Court of Canada dismissed the appeal in Morasse v Nadeau-Dubois, 2016 SCC 44, finding that a conviction could not be upheld under the Code. Moldaver J provided concurring reasons dismissing the appeal. Wagner J, writing for Côté and Brown JJ in dissent, argued that contempt could be established on the second branch of art 50 para 1, which I will explain below.

Contempt of the court is the only civil proceeding in Quebec that carries a penalty of imprisonment.  Both the majority and dissent emphasized the high bar that must be met in order to render an accused guilty of contempt, recognizing that it represents an exceptional power of the court.

The majority’s judgment outlined the procedural and substantive “formalities” that underscore contempt proceedings, noting that in cases where the proceeding is brought by private parties, a strict adherence to these formal requirement holds heightened importance (para 20). Procedurally, “clear, precise and unambiguous notice of the specific contempt offence…must be given to the accused” (para 20). Substantively, the elements of the offence must be proven beyond a reasonable doubt. Where the proceedings concern a specific court order, actual or inferred knowledge of that order must be established (para 25).

Under the (then) art 50 para 1 of the Code, the offence of contempt had two distinct branches upon which a conviction could be rendered:

The Role of Contextual Analysis in Contempt Proceedings

There is a notable difference between the majority and the dissent in how much emphasis they place on the broader situation in Quebec at the time the motion was brought. While the majority’s reasons recognized that the events that took place during the spring of 2012 “were deeply disruptive,” the majority emphasized that the matter before the Court was narrow: they were to assess whether the charge of contempt in question brought by a private party met the procedural and substantive legal requirements necessary to establish a conviction (para 3).

Conversely, the judgment of the dissent dedicated a number of paragraphs at the onset of its judgment to outlining the social and legal context within which the motion for contempt was brought. The background provided in the dissent’s judgment identified the accused as a publically recognized leader of the student movement, and further went on to discuss the significant implication of the student strikes on the functioning of the education system, the involvement of union and interest groups beyond students in the movement, and legislative intervention taken at the provincial and municipal level.

At the onset of its analysis, the dissent noted that when adjudicating a case of contempt, the court’s analysis should not be confined “to a simple question of procedure and burden of proof.” Rather, the court must be alive to the “circumstances in which the order was made” (paras 79, 83). In the case at bar, the dissent emphasized that “the situation in Quebec was explosive, many court orders were being breached and public demonstrations, which were initially peaceful, were escalating everyday” (para 79). This contextual background is found woven throughout the reasons of the dissent and serves as an underpinning to the arguments advanced by the dissent, as discussed below.

When is Specific Knowledge Required? The Importance of the “Theory of the Case”

As a matter of law, one key divergence between the majority and dissent rests on whether the party laying the charge of contempt is required to prove specific knowledge of the order when the allegation rests on the second branch of art 50 para 1. As discussed above, knowledge of the specific contempt charge serves as a threshold question before the substantive elements of the offence are considered. In the case at bar, the appellant brought the motion for contempt on the basis of the May 2nd injunction order.

The majority was of the view that in order to establish a conviction based on the framing of the motion for contempt, the appellant was required to prove that Nadeau-Dubois encouraged others to breach the specific May 2nd injunction order. However, without knowledge of the order, it could not be established that Nadeau-Dubois intended to vilify or excite disaffection against the administration of justice.

While Moldaver J disagreed with the majority’s finding that the statements made in the interview could not support a finding that Nadeau-Dubois intended to encourage illegitimate forms of picketing, he did agree with the majority that specific knowledge of the May 2nd injunction was critical to establishing a conviction. In his view, had the appellant advanced the contempt charge on the basis of the accused making a “blanket call to disobey all court orders” rather than on the basis of the particular May 2nd order, a conviction of contempt would likely have been upheld.

The dissent argued that on the second branch of art 50 para 1, the appellant was only required to prove that Nadeau-Dubois knew that orders existed and contained “the very terms that…[he]…incited people to breach” (para 78). Wagner J argued that in cases where allegations of inciting breach are levied, the evidence must establish either that the accused knew of the order in question or “of similar orders containing the same terms” that the accused incited breach of. This line of reasoning is consistent with the dissent’s emphasis on the circumstances surrounding the particular proceedings and the particular role the respondent held in the movement.

The judgments of the majority and Moldaver J emphasize the importance of the theory of the case in advancing a case for contempt. These two judgments underscore the importance of clearly and precisely setting forth the charges to be met by the accused, a safeguard that is arguably heightened in the case of a contempt charge laid by a private party. Such an approach, in my view, is not overly formalistic but rather is appropriate given the importance of the rights at stake and the seriousness of the allegations in the context of contempt proceedings. The circumstances surrounding the events and the position of the accused can be of critical importance in deriving circumstantial evidence from which knowledge of a specific order may be inferred. However, extending the threshold of knowledge to include similar orders in cases where the accused has been called upon to answer allegations stemming from a specific order creates a significant element of uncertainty in the case to be met that is not proportionate to the seriousness of the rights at stake.  In circumstances such as the case at bar, where the contemptuous action arises in a context where the administration of justice is perceived to be particularly at risk, the theory of the case advanced by Moldaver J appears to be an appropriate balance between the rights of the accused and the integrity of the administration of justice.

Contempt and Freedom of Expression

The respondent mounted a defence to the charges of contempt on two main grounds­—he had no knowledge of the May 2nd order, and his comments were an exercise of freedom of expression. The issue of freedom of expression was argued before the SCC by the parties and the interveners. The majority’s judgment notably omitted any discussion of freedom of expression; however, the majority did note that the bar for contempt is high and “good faith criticism of judicial institutions and their decisions, even where vigorous and outspoken, falls short of this threshold” (para 28).

The dissent, however, devoted five paragraphs to addressing the relationship between section 2(b) Charter rights and allegations of contemptuous speech. The dissent emphasized that contempt powers of the court are inextricably linked with upholding the rule of law, which in turn is the basis upon which the Charter holds force in society. Wagner J held that “[o]ne may not use the exercise of one’s freedom of expression as a pretext for inciting people to breach a court order” (para 123). The dissent’s brief discussion of freedom of expression has been argued by some as suggesting a position that contemptuous speech falls within a category of expression that is not protected under s. 2(b), an interpretation which facially runs counter to the s. 2(b) content-neutral jurisprudence stemming from Irwin Toy, [1989] 1 SCR 927.

Interestingly, this case provides an example of the difficulty in taking a content-based approach to s. 2(b) freedom of expression rights. On one hand, the majority held that it was improper to equate a “statement that it was legitimate to respect the vote to strike with encouraging others to engage in unlawful conduct” (para 41). On the other hand, the dissent and Moldaver J expressed “no doubt” that the respondent’s comments were intended to incite a breach of court orders.

In spite of the majority’s very clear focus on procedural and substantive legal analysis in arriving at its decision to uphold the QCCA acquittal, some–including Nadeau-Dubois–have heralded the judgment as a triumph of freedom of expression.

Kiran Mahal is a third-year student at Osgoode Hall Law School. She is an Editor for theCourt.ca and is the current Managing Editor of the Osgoode Hall Law Journal. Kiran holds a BSc in Biochemistry from the University of British Columbia - Vancouver.