The Most Cited Decisions of the Supreme Court of Canada

This brief comment will have the objective of answering a simple but very interesting two-part question: which Supreme Court of Canada decisions have received the most judicial treatment by subsequent courts and tribunals, and how many times have they been referenced in Canadian jurisprudence?

The list below (and accompanying data) was compiled using CanLII’s “Most Cited” function. This is admittedly not a perfect tool; CanLII’s case-law database is not a comprehensive collection of all written judgments from each and every Canadian court and administrative tribunal. To ensure that this analysis was as close to complete as possible, I have also included the number of citations as tallied by Westlaw (which has a different database and assortment of cases).   This research is current as of November 21, 2016.

Before looking at the list itself, however, I want to make certain observations. These observations build on a few earlier posts on this exact topic (available here and here) from Professor Simon Fodden, former Associate Dean at Osgoode Hall law School and Founding Editor of TheCourt.ca.

First of all, Professor Fodden described the limitations of such an analysis as follows:

What is one to make of all this? Not very much as it is. After all, this crude sort compares apples, oranges, pears and every other species of fruit. More… fruitful would be an analysis of influence that explored defined subject areas. And, too, one would want to see how a Supreme Court judgment was cited: that is, was it applied, distinguished, mentioned, etc. etc. But now that the number of cites can be delivered regularly by CanLII, the business of describing influence has become easier, which is a good thing.

Indeed, the purpose of this post is not to make any sweeping comments about the most important or ground-breaking decisions of the Supreme Court. Perhaps such a task should be left to a panel of leading judges, academics, and practitioners (quite like we did with the “Top Ten Charter Cases”).  Instead, my brief analysis may give some indication as to the frequency with which particular issues have come up in the common law, as well as the degree of influence that certain decisions have had relative to others. Most importantly, however, this post is intended to be a simple and interesting aggregation of some of the data behind the Supreme Court’s most cited decisions.

Second, Professor Fodden’s post includes several graphs which display the number of citations for each Supreme Court decision, in order from greatest to least. His graphs (which are current as of December 13, 2007) are available here and here. In the chart below, I have replicated his analysis with respect to the top 500 most cited cases (which was the greatest number of cases that the system would display), with the data available through CanLII. 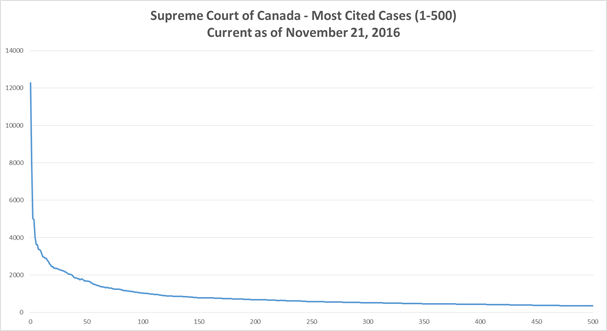 The “precipitous drop” and “long tail” phenomena observed by Professor Fodden in 2007 are, if anything, even more pronounced in the data retrieved nearly ten years later. As you can see, the most-cited case as of 2016 have been referenced by subsequent decision-makers in over 12,000 decisions – over five times more than the most-cited decision in 2016.

I was also curious whether, for whatever reason, unanimous judgments received more judicial treatment than split reasons. At least with reference to the top 50 decisions, there is a near-even divide between cases that were decided unanimously (26) and those that were decided with concurring/dissenting reasons (24). Perhaps this is an out of context statistic (since I haven’t included or been able to locate the breakdown between unanimous/split judgments for all the Supreme Court case law). At the very least, it’s an interesting little note.

The 50 Most Cited Decisions…

The Supreme Court’s unanimous reasons in R v M (CA) provide a strong set of principles and guidelines to be followed by trial judges in sentencing criminal offenders.  Writing for the Court, Chief Justice Lamer affirmed (among many other things), that:

The determination of a just and appropriate sentence is a delicate art which attempts to balance carefully the societal goals of sentencing against the moral blameworthiness of the offender and the circumstances of the offence, while at all times taking into account the needs and current conditions of and in the community.

The thoroughness of the Court’s analysis, coupled with the frequency with which sentencing hearings take place across the country, has made M (CA) the fifth most-cited case in recent Supreme Court history, with over 4,000 citations.

The Supreme Court’s reasons for judgment in Housen constitute an important re-articulation of the fundamental principles guiding appellate courts in reviewing the decisions of lower-courts. The majority reasons dealt in particular with the various standards of review that may apply on appeal, including…

Housen remains a landmark decision on the role of appeal courts, and the majority’s clear guidance on the standard of review analysis has been invoked just shy of 5,000 times by appellate and trial-level courts from across Canada. Commenting on the importance of this decision, Paul Perell – now of the Ontario Superior Court of Justice – noted in “The Standard of Appellate Review and the Ironies of Housen v Nikolaisen” that:

It is easy to explain why Housen will be the leading case [on the standard of appellate review]: taken together, the majority judgment written by Iacobucci and Major JJ […] and the minority judgment written by Bastarache J […] are zealous and fulsome debates by the Supreme Court of Canada about the rules and rationale for appellate review across the full spectrum of errors of fact, errors of mixed law and fact and errors of law.

In Baker, the Supreme Court undertook one of the most comprehensive analyses of judicial review in Canada, providing a framework for approaching both the substantive review and procedural fairness analyses. This decision sets out the requirement for the provision of reasons for administrative decisions as well.

Given the uncertainty that pervaded this area of law prior to its release, Baker remains among the most important precedents for courts on judicial review. Shortly after the release of this decision, Professors David Dyzenhaus and Evan Fox-Decent had the following to say on this groundbreaking decision in “Rethinking the Process/Substance Distinction: Baker v Canada”:

The Supreme Court of Canada’s decision in Baker v. Canada is the most important decision in Canadian administrative law in twenty years. Madame Justice Claire L’Heureux-Dubé’s judgment for the Court puts Baker into the pantheon of great Canadian administrative law judgments, one occupied until now by two decisions of the Court reported in 1979 – Canadian Union of Public Employees, Local 963 v. New Brunswick Liquor Corporation and Nicholson v. Haldimand-Norfolk Regional Board of Commissioners of Police – and by Rand J.’s 1959 judgment in Roncarelli v. Duplessis.

Looking back, these authors were correct: Baker has been referenced in over 5,000 judicial and administrative decisions, placing it third on our most-cited list.

The trial judge’s charge to the jury is one of the most important aspects of a criminal trial – particularly where the central issue for the jury is the credibility of the witnesses, including the complainant and the accused. Prior to the Supreme Court’s decision in W (D), this was also a rather unsettled issue in Canadian common law. For the majority, Justice Cory offered lower courts specific instructions as to the proper way to charge the jury in these circumstances:

Following this decision, trial courts from across Canada have relied on this ostensibly simple and concise articulation in instructing juries as to what reasonable doubt means when faced with conflicting testimony, presumably to avoid having the verdict overturned on appeal. The opposite was true, however; a rigid reliance on this three-part framework by trial judges – which was arguably never Justice Cory’s intention in authoring this decision – became a rich source of appeals. As Patrick Healy points out in “Credibility and the Presumption of Innocence” (2007) 11 Can Crim L Rev 217:

In the past 15 years these three paragraphs have created an industry in criminal litigation and commentary.  This commotion is an illustration of the unintended consequences that can flow when summary statements in the Supreme Court are intended to provide guidance but are received as shackles. Trial judges are anxious to ensure that they get it right–or right enough. Appellate judges are asked, often because there seems to be nothing better to take to the court of appeal, whether the trial judge left traces of direction or self-direction that were close enough.

In spite of the criticism it often receives, there is no denying that W(D) has had quite the influence on Canadian common law. Being picked up by trial- and appeal-level judges over 8,000 times, it remains the second-most frequently cited decision of 2016.  As for those troublesome aspects of the three-part phrasing, the Supreme Court has clarified this area of law on several occasions – most notably R v JHS, 2008 SCC 30.

Dunsmuir is, at present, the leading Supreme Court authority on substantive review of administrative decision-making in Canada. The majority reasons – authored by Justices Bastarache and LeBel – had the effect of (arguably?) bringing greater clarity and simplicity to substantive review by replacing the old “pragmatic and functional” test with the newly formulated “standard of review analysis.” Moreover, this decision also collapsed the existing three standards of review (being correctness, reasonableness simpliciter and patent unreasonableness) into two standards: reasonableness and correctness. As noted by Professor Shaun Fluker:

The majority opinion in the Supreme Court of Canada’s May 2008 decision in Dunsmuir v New Brunswick […] embarks on a path towards the development of a principled and coherent framework to guide judicial review. Such high ambition would surely place Dunsmuir amongst the Court’s existing administrative law heavyweight decisions […]. Unfortunately however, the impact of Dunsmuir has fallen well short of its lofty ambition. Indeed, following the guidance set out in Dunsmuir judicial review of executive and administrative decisions in Canada has become more incoherent and unprincipled than ever before.

Nevertheless, there is no doubting Dunsmuir’s impact on the common law. With over 12,000 citations (according to CanLII) coming from courts across the country, this decision has become the go-to precedent for the substantive review of administrative decisions, and the most cited decision in Supreme Court history.