Homophobia in the Jury Room? The Court of Appeal Rules in R v. Dowholis 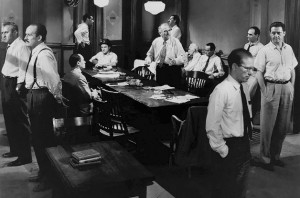 Scene from “12 Angry Men,” a classic tale on the jury process.

Last year, TheCourt.ca published an article discussing when a jury member’s actions could be egregious enough to nullify a verdict. This week, in R v Dowholis, 2016 ONCA 801 [Dowholis], the Court of Appeal for Ontario (“ONCA”) dealt with the actions of yet another rogue juror. This sexual assault case called into question whether the accused’s verdict could stand, given the possibility that one of the jurors may have been biased.

In 2014, Joshua Dowholis—an HIV-positive gay man living in Toronto—was convicted of several sexual assault charges against men that he had picked up in a local bathhouse and brought back to his home. The defendant received a six-year sentence for his crimes.

It would have been just another routine disposition of a case if not for the discovery that one of the members of the jury had discussed the case before and after the verdict was rendered. Jury member Derek Welsman (Jury Member #12) was a radio-show producer and occasional co-host for the now-defunct Dean Blundell Show on 102.1 The Edge.

Mr. Welsman couldn’t resist the urge to share his insight into the criminal proceedings and, on two separate occasions, while serving on the jury, he used the radio show as a public platform to discuss the trial and his experience as a jury member. The fact that Welsman talked about the case was problematic enough given the explicit instructions by the trial judge not to do so. However, it is the manner in which Welsman articulated his views on the proceedings that generated controversy and resurrected an otherwise mundane case.

Audio excerpts from Welsman’s two appearances on the radio show can be heard here.

Not only did Welsman provide details of some of the evidence, but his “comedic” and sexually graphic take on the lifestyle practices of the defendant and the victims potentially offered evidence of his bias against gay people and his inability to decide fairly in the criminal case involving gay men.

On appeal, counsel for the defendant essentially argued that the conviction should be vacated and the defendant granted a new trial because Welsman’s seemingly homophobic commentary created a reasonable apprehension of bias.

On the other hand, the Crown argued that there was no bias and this was evidenced by the fact that the procedural safeguards to ensure an unbiased verdict were properly preserved throughout the trial process. Furthermore, any “reasonable” person would have realized that Welsman’s statements were made in jest and not to be taken seriously.

In its ruling, the justices of Ontario’s highest court unanimously agreed that the conviction should be vacated, but they reached this conclusion for different reasons. Two of the three justices found that a reasonable observer would conclude that Welsman could not have rendered a fair verdict.

Generally, a jury of one’s peers is presumed to be impartial but this assumption could be rebutted by a two-fold test. This test requires the appellant to show: 1) bias (preconceived negative attitudes toward the accused), and 2) partiality (the negative attitude would lead one to discriminate against the accused in jury deliberation) R. v. Find, [2001] 1 SCR 863; R. v. Parks, [1993] OJ No. 2157.

While agreeing that the appeal should be allowed for other reasons, the remaining justice (Doherty J.A) disagreed with the analysis of his colleagues on the bias issue. Doherty J.A was of the view that Welsman’s comments, despite their vulgarity and insensitivity, were intended as a form of comedic entertainment and that a reasonable person would not have regarded the comments as biased against homosexuals. In fact, Doherty J.A believed that Welsman would have likely made similar comments if the case involved heterosexuals involved in a high-risk lifestyle. In Doherty J.A’s view, counsel for the defendant did not even pass the first stage of the two-part test meant to rebut the assumption of jury impartiality.

On Jury Selection Safeguards and Keeping Your Mouth Shut

Reasonable people can and do disagree over significant issues, and the varying opinions of the judges on Welsman’s words make this clear. On the one hand, some of the justices were so outraged by the conduct that it led to the overturning of the verdict. On the other hand, Doherty J.A did not seem to think that Welsman’s words were a big deal.

In my opinion, excerpts from the radio show clearly indicate Welsman’s poor judgment in initiating the conversation in the first place. It is irrelevant whether Welsman believed the things he said or not. Despite what Welsman may have personally believed, his actions were enough that any reasonable outsider would have listened to what he said and likely questioned his ability to be a fair juror in a case involving gay men. The optics of the situation looked bad. If we place ourselves in the shoes of the accused, how many of us would feel confident in Welsman’s ability to review our case objectively? If we substitute his comments about gay people with commentary on an accused based on race or religion, would the court have been unanimous in its reasoning on apprehension of bias?

The chance of locating a single person that has absolutely no biases is unlikely. There is no such thing as the perfect juror and the screening process cannot be foolproof to avoid the selection of jurors like Mr. Welsman. However, the expectation is that, in conducting the public service of deciding guilt or innocence, a juror will set aside those biases and focus solely on the evidence before them.

The main takeaway from this case is simple: if you’re on a jury, keep your mouth shut. Respect the principles of law in conducting your civic duty. Consider the impact that inappropriately sharing information about a case could have on the outcome, especially in cases involving victims of violent crime.

We already have a number of safeguards in our legal system for jury selection and bias screening. For example, pre-emptory challenges without explanation are available to both defense and Crown counsel in selecting jury members. That is, they can have a potential juror dismissed from the selection pool without providing a reason to the court under section 643 of the Criminal Code. The number of pre-emptory challenges available to either side depends on the type of criminal charge. Additionally, challenge for cause is also available where defense or Crown believes that a particular member of the jury may not be able to set aside their prejudice.

Another important element of the selection procedure is the use of “triers.” Triers are individuals that have already been selected to sit on the jury, but are involved in deciding whether a potential juror is fit to judge the case impartially and thereby fill the next available jury seat.

Still, there remains the question of whether these safeguards go far enough to avoid situations like what occured in Dowholis. Should we incorporate a more extensive, intrusive process, as is standard in many American states when selecting a jury? For example, in some US jurisdictions, including the Federal system, jurors may be required to fill out a detailed and lengthy questionnaire that asks about topics ranging from their previous victimization, experience with firearms, a list of every organization of which they are a member, and even their personal hobbies.

Completely eliminating bias from the jury box is not a practical or realistic goal. Instead, having strong mechanisms in place to address blatant offenses by a jury member is critical to ensuring the legal system operates with justice and fairness at the forefront. Dowholis is a reminder of the importance of being vigilant to ensure jury members are carrying out their obligations within the parameters of the law.