The Supreme Court by Numbers (of Words) (Part 1)

This article was co-authored by Richard Haigh and Victoria Peter.

Few things in Canadian legal circles are as agonizingly analyzed as Supreme Court of Canada (“SCC”) judgments. Scholars parse them for logical consistency, legal reasoning, political leanings, policy shifts, historical and factual accuracy, social context, fidelity to precedent and more. Private bar lawyers read them to advise clients, to use as ammunition in future cases, and to predict where the law may go in the future. Government lawyers need them to brief politicians and perhaps to suggest changes to laws. And other judges must decipher them in order to obey their precedential value.

Yet there has been little to no attempt to examine our highest court’s judgments on more prosaic parameters such as the use of language – for example, which judge pens the most words, the most complex words; what is the level at which a specific judge writes? However, with the use of modern technology, it is relatively easy to analyze elements of a judgment that would have been difficult, if not impossible, a few years ago. Starting with this post, we begin what hopefully will become a regular feature on some empirical linguistic data on our beloved SCC. It’s an area that is, in Canada, in need of exploration; in contrast, the U.S. Supreme Court has been analyzed in much more detail (as one example of many, see the SCOTUS blog).

Table 1 shows word-based data from the 2015 decisions of the Court (in English). The data was collected automatically using a program written in Python 3.4. Judgments were converted to plain text; these judgments have largely the same format, with key information following certain headers or words of convention. The program uses a formal pattern-matching language to extract information and remove unwanted text. The text of each judgment was smoothed to facilitate word counting, by removing paragraph numbers and header numbers. For the most part, we removed citations, so as to only include ordinary text. Sentence counts were obtained by counting how many strings of text result from splitting the text at end-of-sentence punctuation. Periods in common abbreviations and strings of text that have the form of abbreviations were not counted as end-of-sentence punctuation. Word counts were obtained by splitting on space characters and excluding list numbers. A total of 65 written decisions, from [2015] 1 SCR 3 (Mounted Police Association of Ontario v Canada (AG)) to 2015 SCC 65 (R v Reisberry) were examined. Because of attribution difficulties, we have not included any jointly authored opinions and no oral decisions. And as it’s virtually impossible to be completely accurate when counting words in judgments (too many “v” and “J.,” for starters) we believe the results are within ± 1.5% of the actual. 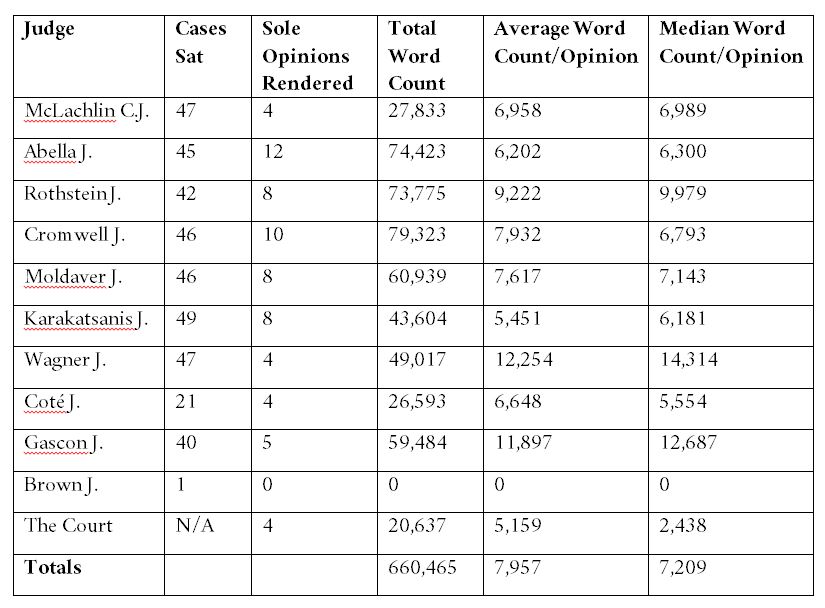 The longest single judgment, written jointly by Justices Wagner and Gascon in Hinse v Canada (Attorney General), [2015] 2 SCR 621, clocks in at 21,500 words, 180 paragraphs, 941 sentences. The case represents a terrible miscarriage of justice, in which Réjean Hinse, falsely imprisoned for 15 years, sought compensation from the federal government and applied for a pardon and for the Minister of Justice to exercise a power of mercy. He had already received $5.5 million in out-of-court settlements from the town of Mont-Laurier and the Attorney General of Quebec. The decision centred on the standard of conduct that applies where a Minister of Justice exercises this discretionary power (the Minister was holding back from paying everything Hinse asked for, claiming, in part, that the Mont-Laurier and Quebec A.G.’s settlement were sufficient). The length of the decision seems a little surprising to us, only in the sense that it would not seem, at least on its face, to be the most complicated legal issue that the Court faced in 2015. Just pay the poor guy! But seriously, the case had larger ramifications in terms of what constitutes bad faith. It’s plausible that Wagner and Gascon needed to spend a great deal of time on the judgment as there needed to be a strong rationale as to why the original $5.5 million settlement was appropriate. Mr. Hinse deserved no less.

The longest judgment of all, where three separate opinions were rendered, was R v Kokopenace, [2015] 2 SCR 398. Justices Moldaver (for the majority), at 12,964 words, Karakatsanis (concurring in result) at 6,377 words and Cromwell J (for the dissent) at 12,572 totalled out at 31,913 words. The state’s role in jury representation and selection was at issue in the case, and the court was deeply divided on how jury selection affects fair trial and the public administration of justice.

It is probably unexpected that the most verbose judge – remember, this is based on the English word counts – is Justice Richard Wagner whose median judgments are a significant 14,314 words (his nearest rival is Gascon J. at almost 12,700).  In contrast, it may not be surprising to many that Justice Abella is the most prolific of the judges, in terms of individual judgments rendered – partly due to the fact that she dissented on her own more than any other judge, but also because she seems to have penned more sole decisions than any other judge – and is only bested by Cromwell J. in terms of total words. At 10 sole judgments rendered, for a total of more than 74,000 total words (Cromwell had a total of just over 79,300 words), she averages about 6,200 words per opinion. (In comparison, a doctoral thesis in law is typically 100,000 words. Justices Cromwell and Abella, in the course of a year, almost made it!) 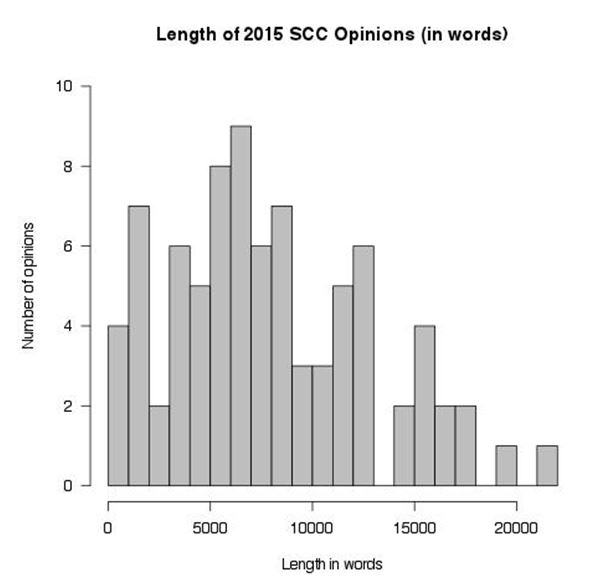 It is also interesting to note that there is a definite tendency for the average judgments to be similar in length. The outliers such as Wagner and Gascon are counterbalanced by six judges (and “The Court”) whose averages fall in the middle of a bell curve at between 5,500 and 7,000 words (and their medians are grouped even closer together). As might be expected, the curve is skewed to the right, since it is unlikely that many judgments would be shorter than a certain length, but more likely that some (such as Gascon and Wagner) would write more. Finally, the longest word coined by the Court in 2015 was the 21 letter scientific monster, “tetrahydroncannabinol,” better known by its acronym THC. It appeared just once in R v Smith, [2015] 2 SCR 602, a judgment rendered by “the Court.”

Obviously, word counts, average judgment length, numbers of paragraphs, etc. for one single year are only just the beginning. In future instalments, it is hoped that we can compare different judicial eras, and later on, employ more sophisticated methodologies to begin assessing things such as clarity or language sophistication of judicial opinions. Stay tuned. 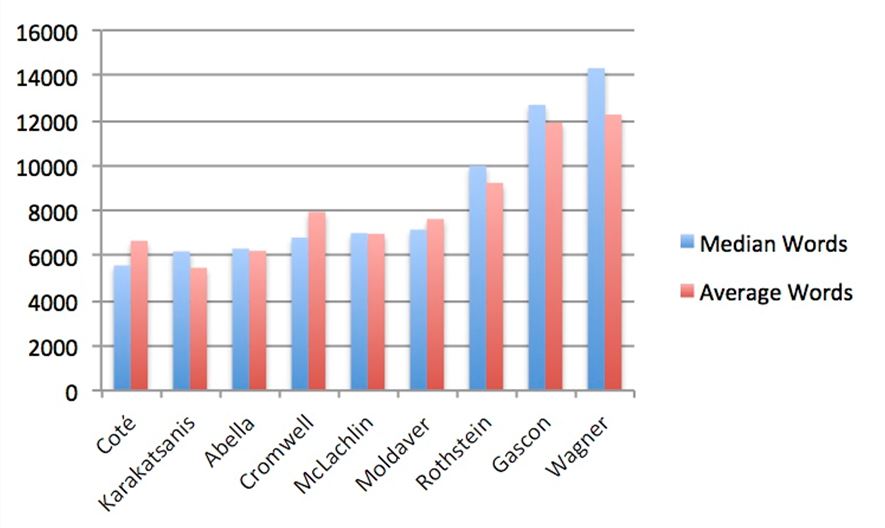