2015 has been a particularly significant year for the Supreme Court of Canada (“SCC”) in a number of ways, and indeed, TheCourt.ca’s editorial staff has been kept quite busy. Part I of this year-in-review post will summarize the activity of the SCC and the comings and goings of Justices and staff. Part II will discuss some of the key precedent-setting decisions handed down this past year and important cases to follow in 2016.

The Activity of the Court

From purely a numerical standpoint, 2015 has not been a terribly prolific year for the SCC, with only 65 decisions  – 12 of which were delivered orally from the bench at the conclusion of the hearing.  This is down significantly from the 76 (21 orally) appeals decided in 2014, and the 73 (eight orally) in 2013.  Despite this significantly smaller docket, last year has nonetheless produced some very significant pronouncements across various areas of law.

As expected, the bulk of the appeals heard by the SCC arrived via the country’s two largest jurisdictions – Ontario and Quebec – with 14 appeals being heard from each of the two provinces.  This is closely followed by British Columbia with 11, and the Federal court system with 10.  Only one province – Prince Edward Island – did not have a legal dispute resolved by Canada’s highest court in 2015.

The ultimate disposition of the decisions is also noteworthy, with more appeals being allowed (27 out of 65, or 44%) than dismissed (33 out of 65, or 51%).  Two appeals were allowed in part, one was “largely dismissed,” and the bench split in its disposition of the three matters heard in Canadian Imperial Bank of Canada v Green, 2015 SCC 60.  There was no disposition in Saskatchewan (Attorney General) v Lemare Lake Logging, 2015 SCC 53 [Lemare] since the dispute was moot (after a private settlement by the parties before the hearing), and the appeal acted much like a reference. 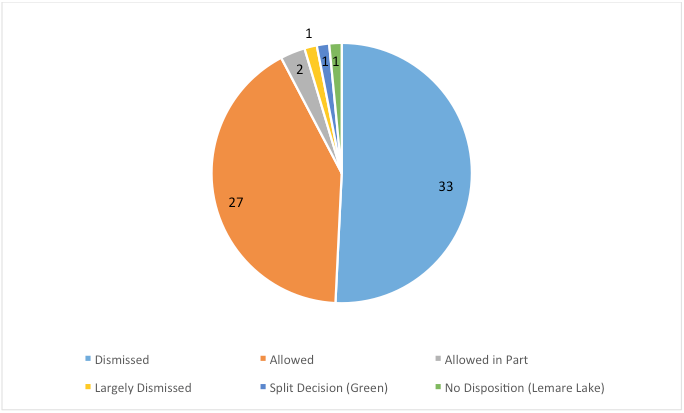 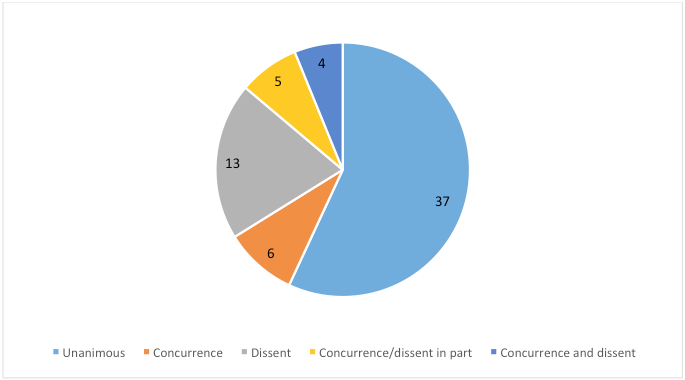 The award for the busiest judge in 2015 goes to Justice Rosalie Abella, who authored a total of 15 reasons (excluding three given orally from the bench) – eight of which as minority reasons.  Justice Cromwell was in second place with 12 (four unanimous reasons, six for the majority, and one dissenting), followed closely by Justice Richard Wagner with 11. 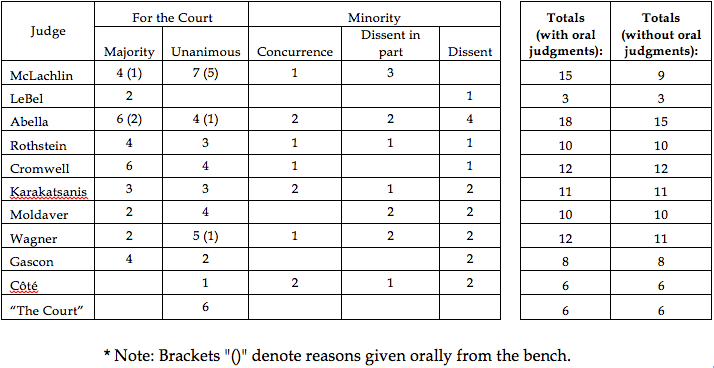 2015 has been a significant year in terms of personnel changes, with the judicial career of two great judges coming to an end.  Justice Louis LeBel, who formally retired from a long and fruitful judicial career in November 2014, continued to write and sign off on judgments well into 2015.  His final contribution to Canadian law in this capacity was the strong dissent in Quebec (Attorney General) v Canada (Attorney General), [2015] 1 SCR 693 [Quebec v Canada], where he and the other two Quebec judges (Justices Wagner and Gascon) expounded a modern, flexible, and cooperative approach to Canadian federalism.  Despite having retired in his capacity as a judge, Justice LeBel remains actively involved in the legal community – both as a Judge-in-Residence at Laval University and as counsel to Langois lawyers, an elite Quebec law firm.

Justice LeBel was replaced on December 1, 2015 by Justice Côté – a former partner at Osler, Hoskin & Harcourt LLP, where she headed the Montreal office’s litigation group.  In addition to having a stellar career as a litigator and lecturer, she also happened to be constitutionally eligible to fill a Quebec-seat on the bench – a major plus, with respect to the 2014 Supreme Court Act Reference, [2014] 1 SCR 433.  Given her relatively young age as a judge in Canada’s highest court, and the convention that the position of Chief Justice is to alternate between a Quebecker and a non-Quebecer, she may be in line for a promotion when Chief Justice Beverley McLachlin retires in (at most) a few years’ time.

2015 also marked the (several month premature) departure from the bench of the Justice Marshall Rothstein, after an illustrious twenty-three year judicial career.  First appointed in 2006 (the first ever to face a “public grilling by a parliamentary committee”), Justice Rothstein has gone on to fearlessly author some of the most significant decisions in Canadian law – including unanimous reasons in Saskatchewan (Human Rights Commission) v Whatcott, [2013] 1 SCR 467 upholding the province’s prohibition on hate speech.  He too has been busy since his retirement, having been appointed a Distinguished Research Professor at Osgoode Hall Law School, and joining Hunter Litigation Chambers as Associate Counsel.

Replacing him was incoming Justice Brown, who began his role in Canada’s highest court after several years as a judge in Alberta, and prior to that, as a professor and associate Dean at the University of Alberta, Faculty of Law.  Despite beginning his tenure amid some controversy, TheCourt.ca’s Lillianne Cadieux-Shaw reminds us that Justice Brown’s noteworthy background “add[s] ideological diversity to the court,” and indeed, his academic and practical expertise in tort and commercial law will surely be an asset to both him and the SCC as he joins the ranks of Canada’s top court.

In other, less publicized (but by no means less important) news, the SCC poached litigator Gib van Ert from Hunter Litigation Chambers to fill the role of Executive Legal Officer, on a two-year term.  Mr. van Ert, who previously clerked at the SCC for Justices Charles Gonthier and Morris Fish, replaced Owen Rees in August 24, 2015.  Mr. Rees, who was praised by Chief Justice McLachlin for his “invaluable assistance and advice,” will return to his practice of regulatory and public law at Stockwoods LLP.  Among the new changes ushered in under Mr. van Gib is the SCC’s new Twitter pages – @SCC_eng and @CSC_fra – which will allow the Canadian legal community to keep abreast of the latest developments in SCC jurisprudence with the click of a button.

Given the activity in 2015, we can probably expect a quieter 2016 in terms of comings and goings, with no judges set to retire, and no vacancies which remain to be filled – although the possibility of a surprise early retirement (like that of Justice Rothstein) remains on the cards…