2016 and the Supreme Court: A Year in Numbers

This year, my task has been made infinitely easier; Eugene Meehan (from Supreme Advocacy LLP) undertook a fantastic analysis of some of the most important decisions handed down by the Supreme Court across various areas of Canadian law.

To avoid duplication, therefore, this “Year-in-Review” post will present some interesting statistics analyzing the Supreme Court’s activity in 2016.

2016 was a fairly quiet year for the Supreme Court.  In total, 60 appeals were decided through 55 individually indexed reasons for judgment.  Some appeals were heard and decided together, accounting for the difference between appeals heard and judgments rendered. Of those 55 reasons, 12 were given orally.

The number of reasons released in 2016 is down from the 65 reasons given in 2016 (12 orally), and the 76 given in 2014 (21 orally).  Indeed, last year’s activity continues a general downward trend in the number of decisions released annually.  There are many reasons that may help explain this, including an increasing complexity of legal questions at issue before the Supreme Court.  Further research on this point is required. 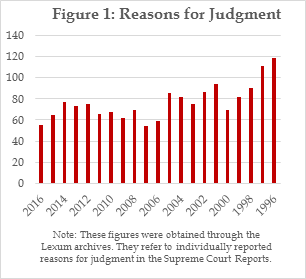 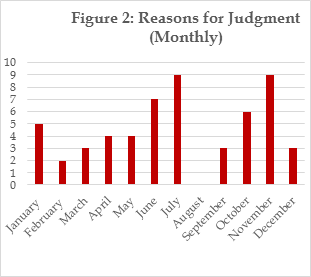 At Figure 1, you will find a graph displaying the number of reasons for judgment over the past 20 years.  A month-by-month breakdown for the 2016 calendar year can be found at Figure 2.

Of the appeals decided by the Supreme Court in 2016, more than half arrived from Western Canada: 16 from Alberta, 14 from British Columbia, and 1 from Saskatchewan.  13 appeals were decided from Quebec, 8 from the federal system, 7 from Ontario, and only one from Newfoundland and Labrador.  Surprisingly, there were 7 Canadian jurisdictions from which no appeals were decided by the Supreme Court of Canada in 2016.  A full breakdown can be found below, at Figure 3. 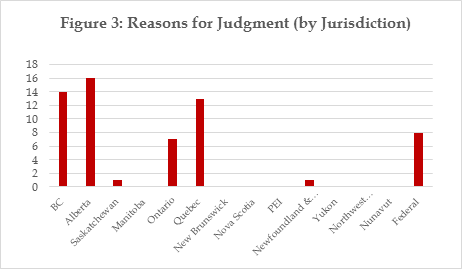 2016 was a busier year than usual for the Supreme Court with respect to applications for leave to appeal. Altogether, the Court decided on 546 leave applications –more than it heard annually over the past few years (see Figure 4).  Of those, 51 applications were granted, 492 were dismissed, and three were remanded back to the respective courts of appeal for disposition in accordance with the Supreme Court’s recent decision in Ledcor Construction Ltd v Northbridge Indemnity Insurance Co (see Figure 5). 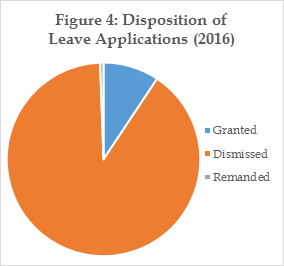 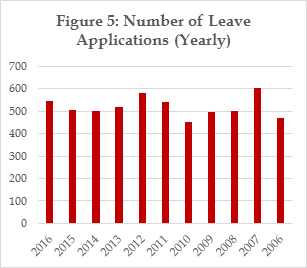 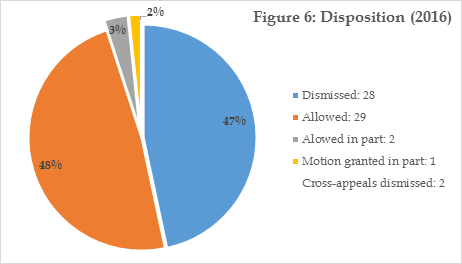 Out of the 60 appeals decided in 2016, there was a near-even split between those that were allowed (29, or 48%) and those that were dismissed (28, or 47%).  Of the remaining appeals, two were allowed in part (R v KRJ; Conférence des judges de paix magistrats du Québec v Quebec), and one motion was granted in part (Carter v Canada).  Of the two cross-appeals, both were dismissed (Daniels v Canada; Endean v British Columbia).  A visual breakdown of these numbers can be found at Figure 6.

Relatively speaking, 2016 was quite an “agreeable” year from the perspective of the Supreme Court’s individual members.  The Court spoke unanimously in just under half of all appeals (26 out of 60, or 47%).  25% of judgments included dissenting reasons, and 7% included concurring reasons.  The remaining judgments were decided either with both concurring and dissenting reasons, or with both concurrence(s) and dissent(s) in part.  More statistics on this can be found at Figure 7. 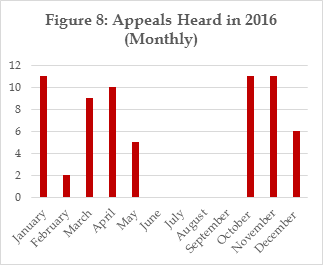 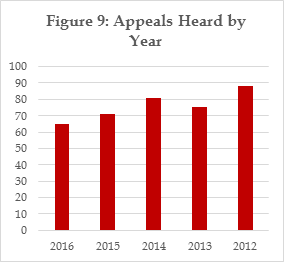 The longest judgment in 2016 was R v Jordan, with a length of 303 paragraphs, or 27,110 words.  The majority judgment in that decision was authored by Justices Moldaver, Karakatsanis, and Brown (at 12,605 words), with a concurring judgment from Justice Cromwell (at 14,505 words).

The median judgment length was 73 paragraphs long.  6 judgments were given in just one paragraph (all of which were rendered orally).  Among them, the shortest was R v Shaoulle, with reasons for judgment succinctly put by Chief Justice McLachlin in only fifteen words: “The appeal is dismissed for the reasons of the majority of the Court of Appeal.” Figure 10 is a chart displaying the length of judgments in 2016, by paragraph count, from longest to shortest.

Of the 55 reasons for judgment handed down in 2016, Justice Richard Wagner was involved in the most (52) – though he was closely followed by Justice Karakatsanis (50) and Justice Côté (49).  The lower participation rates of Justices Brown and Rowe can be accounted for by the fact that they are both very recent additions to the Supreme Court. Similarly, Justice Cromwell retried from the Supreme Court on September 1, 2016, meaning that he did not participate in the judgment of any appeals heard after that date.

The chart at Figure 11 shows where the ten active judges in 2016 have fallen on the majority/minority divide in relation to the 55 judgments released last year.

* “Participation” refers to the involvement of the judges in the reasons released in 2016.

** The “Majority” column captures instances where the judge either wrote or joined a unanimous, majority or concurring set of reasons.

*** The “Minority” column captures instances where the judge either filed or joined a dissent or a dissent in part.

The most prolific Supreme Court judge in 2016 was Justice Côté, who authored a total of 18 judgments – 7 for the majority, 8 in dissent, 1 concurring, and 2 dissenting in part.  Justice Malcolm Rowe understandably wrote no judgments, as he only was sworn in as a Supreme Court judge on September 1, 2016.  A full breakdown of these numbers can be found at Figure 12.

Altogether, 2016 was a very interesting year for the Supreme Court, from a quantitative stand-point.  What remains ahead?  2017 is already off to a flying start with the exceedingly interesting judgment in Ernst v Alberta Energy Regulator, and we can expect more to come from the Justices of Canada’s highest court.

As always, TheCourt.ca remains your one-stop source for all SCC-related news and analysis.